Take to the skies on your first solo flight 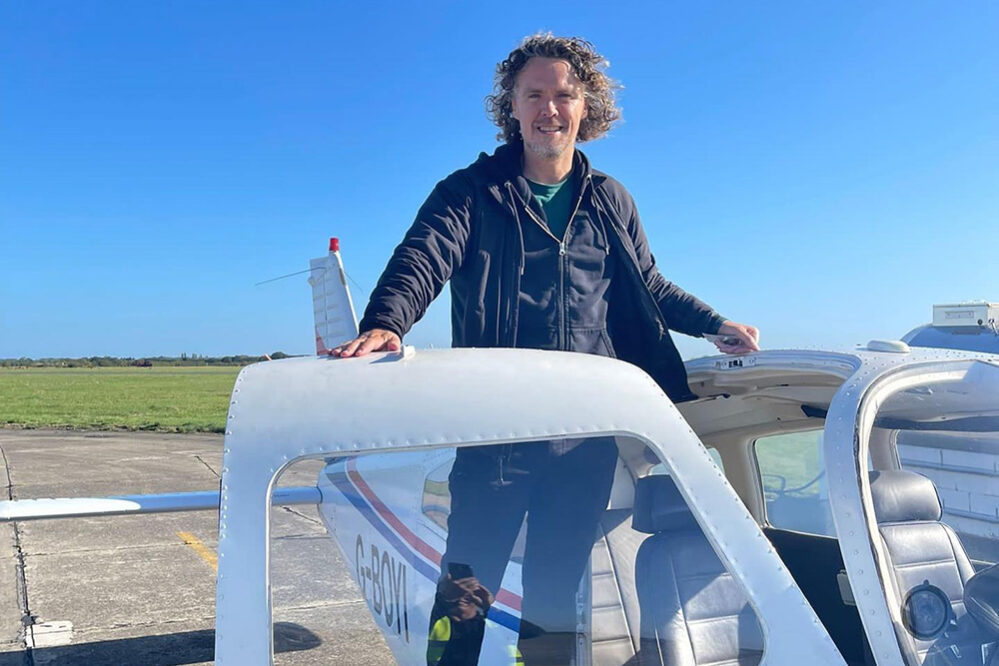 Yorkshire Aviation Academy Instructors have successfully trained hundreds of students for their first solo flight. This is a milestone occasion and a pivotal point for any budding pilot working towards their PPL. Instructor Tim Simpson recalls the day his student Ross completed his first solo flight and joined the coveted club.

It was a glorious day at Leeds East Airport when I arrived early in the morning. Barely a cloud in the azure sky and the trees gently murmured in the breeze. There’s an air of excitement. One of our clients Ross has been close to completing his first solo flight for a few weeks. It looks like the weather is finally going to behave and allow the momentous event to happen. I ring him to share the good news and urge him to get to the flying school as soon as he can.

I love it when the weather is like this. Ok, it might not be everyone’s cup of tea, getting up very early on a Sunday morning for flying lessons, but it is mine. The early morning air is crisp and can be very still. It’s only when the sun starts to heat the ground that the air currents begin to rise and the winds aloft are brought earthbound, making it a bit bumpy in the visual circuit.

Ross duly arrives and we go through the brief. I tell him I need to see three consecutive safe circuits, plus a practice engine failure after take-off and then he’s on his own. He looks at me with a degree of excitement mixed with some trepidation. Is today going to be the day it finally happens?

We chat as we walk to the trusty Piper PA-28. We are both in good spirits but the sun has been doing its thing and a gentle breeze has started. I do hope that it stays within a reasonable level and we can do this. Once the checks are completed, out we taxi. Ross is in no rush and I like this, he’s playing it cool. We complete the take-off checklist and it’s time to get airborne.

Ross manoeuvres the aircraft off the ground with confidence. The upwind, crosswind and downwind legs are all flown very nicely. I sit there quietly, noting his downwind checks, his radio calls and his spacing in the circuit. All is good. Everything is as I would wish it to be. He turns onto the base leg and starts to descend toward the final approach. His rate of descent is not quite as I would like it and by the time we are pointing at the runway, we are higher than is ideal. However, Ross is determined and he keeps the aircraft going down nicely toward the runway. The landing, although further into the runway than it should be, is smooth and well-controlled. One down, two to go.

The next circuit is a repeat of the first. Two down, there’s now just one to go. We completed the practice engine failure after take-off, it would have worked and we would have walked away. I’m pleased, this is all going well. I position the aircraft downwind as the engine failure after take-off (EFATO) has put us well out of position and then I hand over control. There’s just one more landing I need to see. But, there’s a slight issue. Ross neglects to take power off around base and we fail to lose height quickly enough, the speed is too high. Eventually, he notices and makes a large correction. We landed a little long but he pulled it out of the bag.

After three satisfactory landings, this is good enough. I say: “I have control,” and I joke that I’ve had enough of being smashed around the circuit by him. I’ve had my fillings rattled every time we reacquaint ourselves with the runway. It’s now time for him to go by himself!

We taxi off the runway and back to the apron in front of Air Traffic Control. I brief him on precisely what I want him to do and remind him of what he needs to do if something unexpected happens. I instruct him to fly the best circuit he has ever flown and then I get out and walk away. He is on his own. It is time for him to prove that he can fly by himself. It’s time for him to join the long list of pilots who have made the leap airborne by themselves for the first time. It’s time for his first solo flight.

Twenty minutes later he is back in front of me. A huge grin engulfs his face. The ecstasy of achievement is clearly evident as he gets out to revel in the sense of having done something very special. He now joins the small club of fellow aviators who have made the huge leap forward with their first solo flight. Well done Ross, I’m really proud of you!

Yorkshire Aviation Academy offers the perfect place for flying lessons Leeds. So if you would like to learn to fly as a hobby or have your sights set on becoming a commercial airline pilot, we look forward to hearing from you.

Based at Leeds East Airport, formerly RAF Church Fenton, our flying school is ideally situated for anyone looking for flying lessons Leeds and Yorkshire area. Admire the spectacular Yorkshire views as you start your aviation journey. Our advanced training courses include restricted instrument and night ratings, all designed to help enhance your pilot skills. We offer guidance and mentoring to all pilots, whether you are just embarking on your initial training, undertaking further training or pursuing your commercial pilot licence. We aim to deliver a training program that fulfills the specific requirements of our customers.